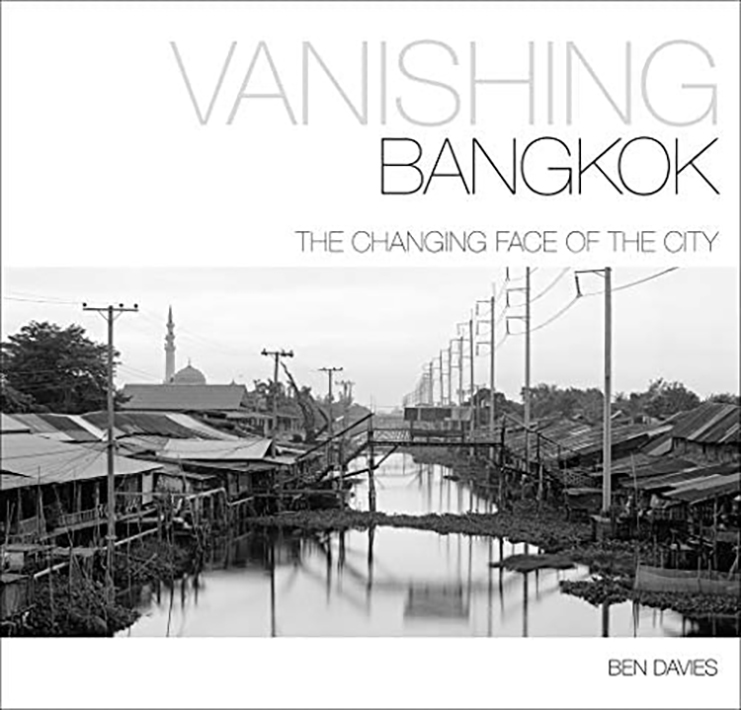 
Bangkok is famous for its temples, markets, food, and other delights. Architecturally, however, mostly only the palatial shopping centers and towers made of glass and steel are considered. Awe-inspiring attention to the architecture from the city’s past is paid to the royal palaces and mansions, influenced by European mansions and housing the kingdom’s aristocracy. It takes real effort to discover the beauty of Bangkok’s ancient indigenous architecture, threatened by the rapid development of this sprawling metropolis.

The photographer Ben Davies spent decades in Southeast Asia before he was fascinated by the abandoned and decaying buildings from Bangkok’s early history. In 2014 he bought a camera that bordered on antiquity, with film, lots of lenses, a tall tripod and a black cloth that protects the heads of the photographers in old films. “Just setting up this unwieldy camera on a tripod can take 10 minutes,” says Davies, and taking pictures can take up to half an hour.

“Why don’t you take nice photos of the city?” Asked a security guard once while observing this elaborate process of taking photos. But Davies was intrigued by the different architectural styles he saw in the old buildings: Indian, Khmer, Burmese, Chinese, Portuguese, all fused into one completely Thai form. He spent five years tracking down and photographing these places before they could disappear from sight and memory.

The pictures in The disappearing Bangkok: the changing face of the city are in black and white, with razor-sharp details and clarity. Each of them fills a whole page in a book that is itself a work of art and a compelling call for monument protection.

His images are haunting. A house surrounded by trees is tumbling dangerously towards a nearby canal. A towered mansion surrounded by rubble and a balcony sinks into the earth as it slowly falls into disrepair. A house that has stood for two centuries is engulfed by vines and the roots of banyan trees and looks like a ruined jungle temple. Even more poignant, however, are the shophouses, which are still doing business and still inhabited by families who know full well that they are the last generation to live there.

These functional wooden buildings are adorned with Palladian windows and decorated with intricate wood carvings. There are traditional medicine home grinders, barber chairs that have been in use for 100 years, coffee shops that bear no resemblance to Starbucks, and shrines of Chinese deities that are still visited by devotees. These humble and doomed places have living histories that deserve to be honored.

In the heart of Bangkok, under one of the city’s busiest Skytrain stations, lie two wooden buildings framed by a wild ganglia of power cables, their doors opening onto the street. Surrounded by shiny shopping malls selling imported luxuries from Porsche to haute couture, they somehow survive and give hope to similar structures in a city where “the ordinary has little cultural value”. Perhaps the beauty of Davies’ photographs will add strength to the conservation battle that recently erupted in Bangkok, while the art of his work is sure to delight and inspire photography enthusiasts around the world.

A kind of backing band from Davies’ publisher, Unseen Siam: Early Photography, 1860-1910, has received the same care and artful production that characterize the offerings of the Bangkok boutique publisher River Books. The almost 400-page encyclopedic work is a history of photography, not a history of Siam, and testifies to how far the art of the camera has advanced in just over a century.

The art historian Joachim K. Bautze has compiled 50 years of work by 15 photographers, all from the West, with the exception of Kaishu Isonaga from Japan, who receives a few pages of company photos at the end of the book.

Bautze provides a wealth of details for almost every photo: when it was taken, where it can be seen, who donated it, its dimensions, inventory number and administration number. Unfortunately, all information on the subject of the photo is limited to the caption, which can benevolently be described as poor.

Most of the space is given to Siamese royalty, with landscapes and the occasional photos of everyday life often crowded onto one page. Since the book is organized by photographer rather than topic, the repetition is a bit annoying and rather boring. It quickly becomes clear that King Mongkut was a grumpy looking monarch and his son King Chulalongkorn was definitely hot. Royal descendants and wives periodically glare somewhat shyly from the sides, and there are posed pictures of girls who are young examples of what used to be called cheesecake photography.

Far too much attention is paid to “business cards,” postcard-sized portraits of Europeans in Southeast Asia, their families and their Victorian salons. Although the book’s title promises a glimpse of Siam, there are few photographs that deviate from Bangkok’s borders, and many that go further afield were taken in Singapore, Burma, and Cambodia. A handful of show views of Ayutthaya and Chiang Mai, but these almost feel like an afterthought.

Occasionally a page contains a single landscape, usually of the banks of the river that was Bangkok’s main thoroughfare, or a shot of elephant hunters in the countryside, but most of these photos show people who could afford the services of a photographer.

This story of pioneering photographers will be interesting as a source to academic researchers and a source of disappointment to almost anyone else.

As St. Thomas moves to Division I athletics, their facilities must follow suit