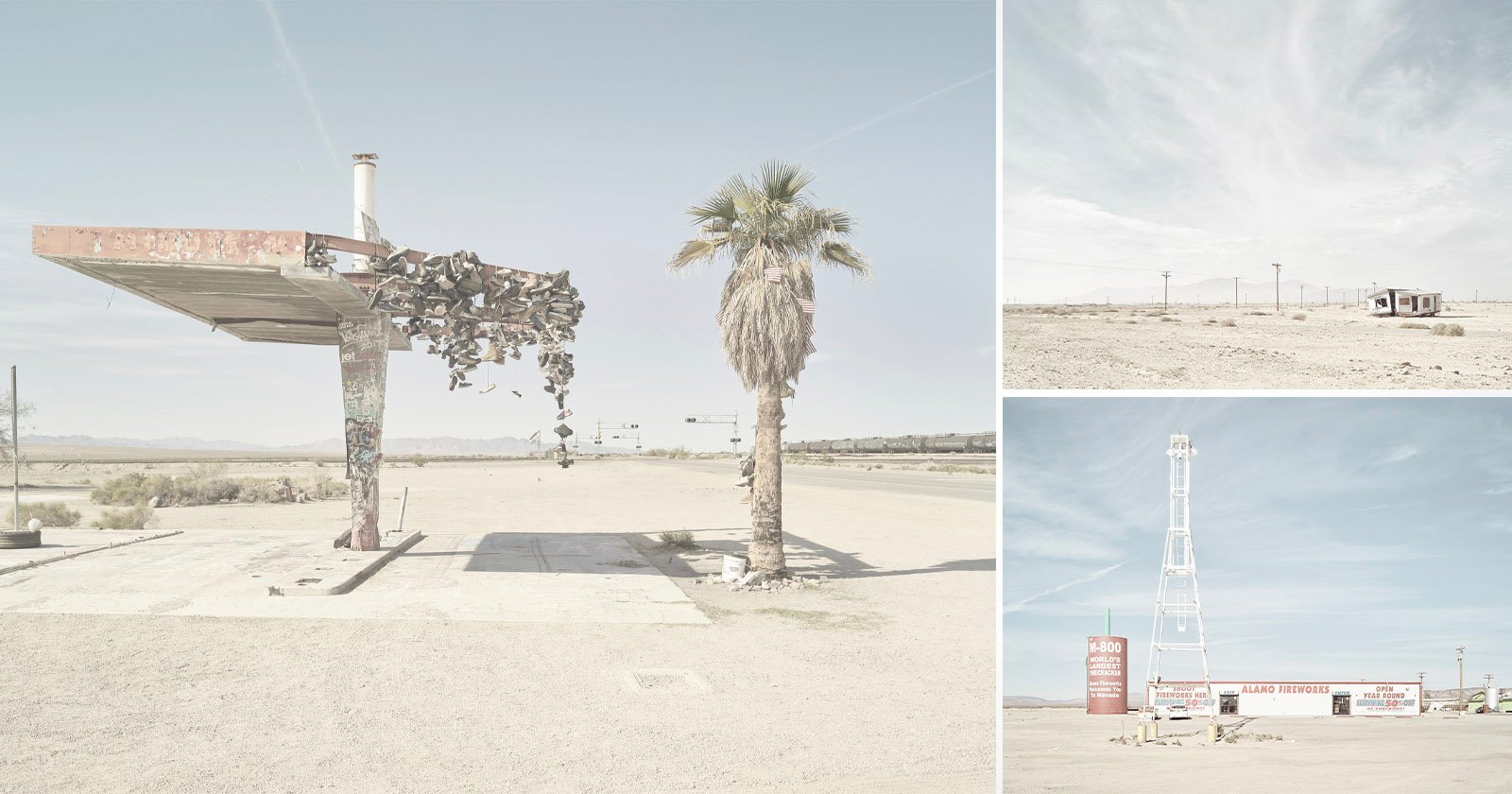 The photo series “Back Roads of Americana” is a modern masterpiece

Havell describes the project as a visual anti-aesthetic that portrays an uncompromising, unromantic, glorified view of the human-altered American desert landscape and is a deliberate rebellion against modern landscape photography motivated by the success of social media.

In the spirit of the New Topographics movement, this project paid homage to the ordinary with the underlying narratives of isolation, desolation and abandonment.

Below is Havell’s first-person account of how he started the series, and is courtesy of your request PetaPixels Partnership with ELEMENTS magazine. ELEMENTS is the new monthly magazine dedicated to the finest landscape photography, insightful editorials and a flowing, clear design. Use the PETAPIXEL10 code for a 10% discount on the annual subscription.

The Back Roads of Americana project spanned several states, including Nevada, California, Arizona, Utah, Texas, and New Mexico. As a built environment photo project, it explored the less-visited expanses of the Mojave, Sonora, Chihuahuan and Great Basin Desert regions of the American Southwest. I covered 10,000 miles in three trips from my native Australia, and although I had photographed much of the North American landscape before, it was the beginning of a revitalized love affair with the American landscape, albeit the man-made, Anthropocene landscape. 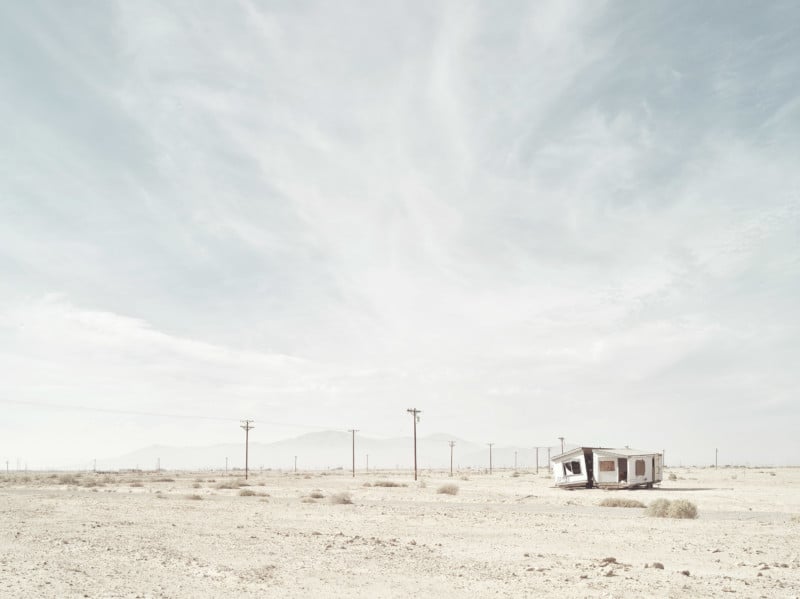 I decided in October 2017 to take on a long-term personal project in the lesser known Western Desert of the USA. It might not have been a new or original concept and it didn’t have to be, because from a personal point of view it was important to me to develop from the beautiful, popular landscapes that I had made for many years and to look for something else – that the ugly, the unpopular and in many cases the unpopular. This project was more of a documentation of the landscape than a glorification and a search for more meaningful subjects without the beautiful aesthetics. I realized not only what some have described as the real anti-landscape, but also the simple but whimsical architecture of its bones. 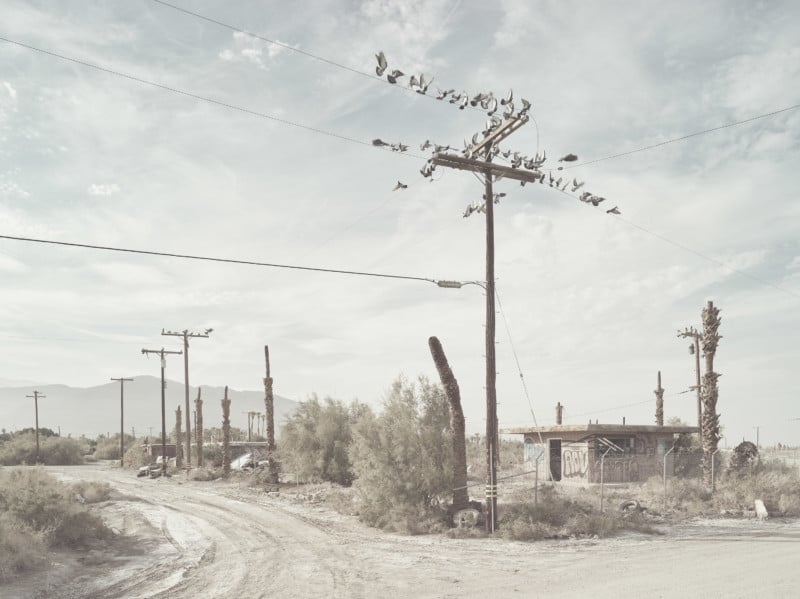 Of course, we all know America has beautiful natural landscapes, but I wanted to change direction and dive headfirst into the deserted and neglected worlds that stretch far from the highways in wasteland. I was looking for unusual subjects with a substantial narrative, and I wanted to document a visual anti-aesthetic that shows an unadulterated view of the desert landscape that has been changed by man. In the spirit of the New Topographic movement of the 1970s, I wanted to rebel against the mainstream and pay my way to respect the ordinary world. I also wanted to do my small part in raising awareness of some serious environmental issues that governments are reluctant to respond to. 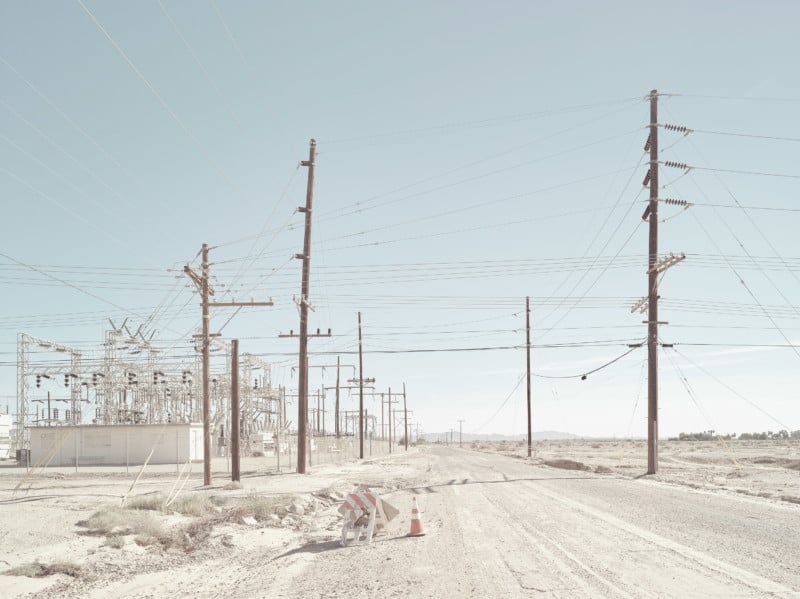 There is so much to photograph in the American West Desert, good and bad, much of which is history preserved in time that transports you to another era to imagine how tough and resilient these people were to get in the extreme, remote Survive environments. I spent a lot of time alone in the historic cities, walking, observing shapes and forms, and admiring the downtown architecture, which was not complicated but rich in detail. Life was simple back then, which was often reflected in the humble houses that are so reminiscent of a small American town. The small towns through which I drove without a glance on my way to the “hunt for light” were now the focus, more than a passion. The cities were more interesting than they first appeared and a joy to photograph as they reflected the stories of boom and bust from a bygone era. 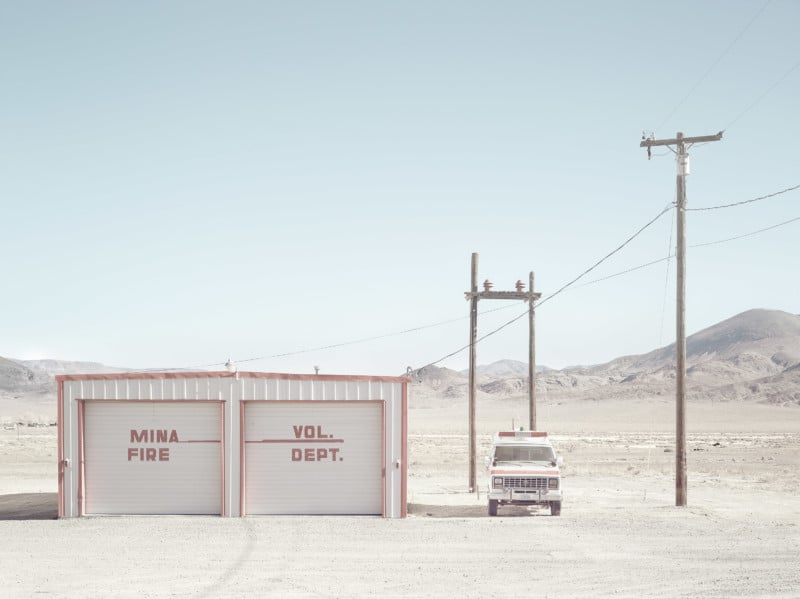 The photographic thought process behind this project was to reduce the minimalist desert scenes by isolating the subject in order to integrate or interact with the desert and most importantly, to convey a sense of place. Many of the structures were photographed head-on and centered in the frame to simplify the composition and emphasize the architectural form. These are basic, traditional structures whose shape I wanted to preserve and add to. The human impact on the landscape is an important narrative, but so is the human absence. I think landscape photography isn’t about people, it’s about their impact on the landscape. I wanted to stimulate thought and convey a feeling of isolation and abandonment. 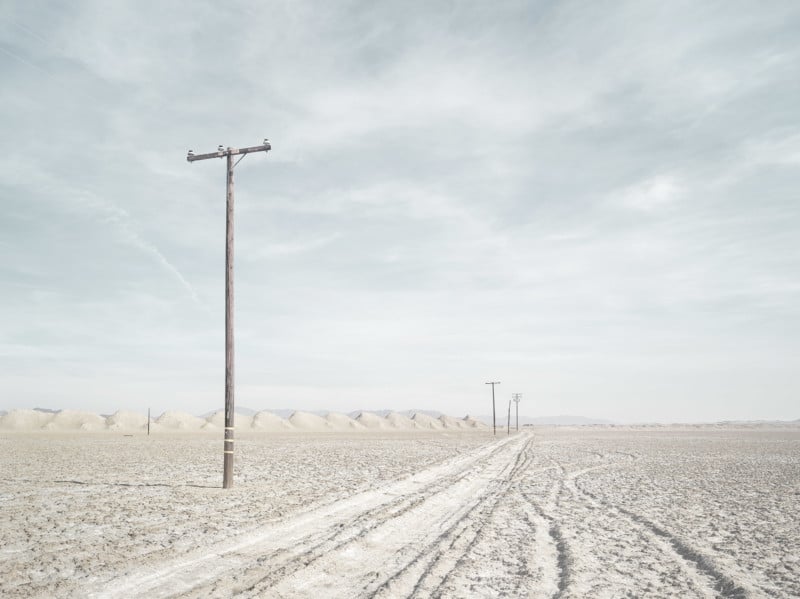 In a different, contrary approach to traditional “good light” landscape photography, I photographed the scenes in glaring, washed-out midday light to emphasize how I see the desert and not to glorify the perception of others. Interestingly, many of the images had the backdrop of the smoke-filled skies of the California forest fires, decaying toxic deserts, and harsh, often low socio-economic areas. In short, I felt I had to respect the topic and the community that surrounds it. Whether good, bad or indifferent, one of my tasks as a landscape photographer is to photograph all environments and leave my preconceived ideas behind. 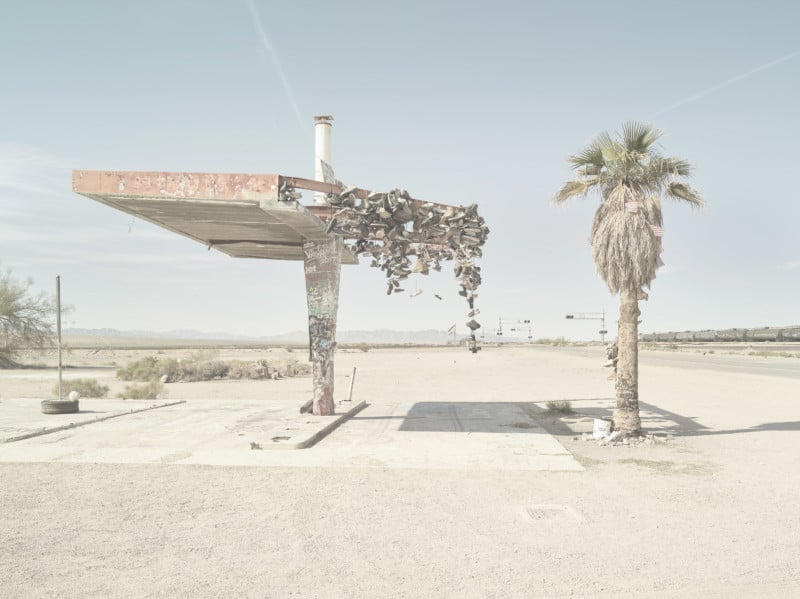 Many of the images in this project document the Salton Sea in California. The Salton Sea area was once an idyllic lakeside vacation playground for Californians, but is now an escalating environmental disaster caused by human neglect, mismanagement, and government inaction. Under the almost abandoned but still functioning housing estates lies the decaying infrastructure of broken dreams, which is slowly but surely turning into a shabby, toxic wasteland. 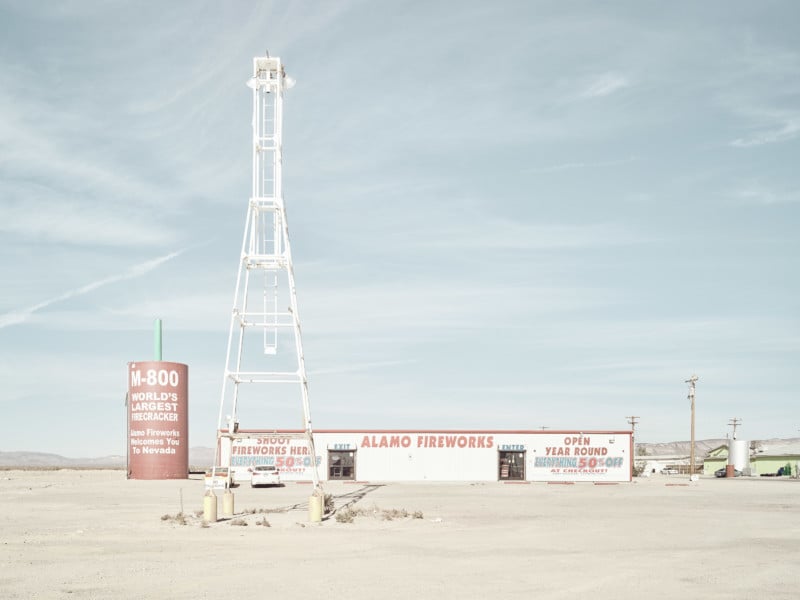 The Salton Sea was formed when an unprecedented flood in 1905 broke the Colorado River through an irrigation canal and drained into the Salton Basin for 18 months. This lake, which is occasionally fed by rivers but has no drains, relies on evaporation and is consequently a polluted mix of agricultural runoff and algae pigmentation that makes the lake 30% salty than the ocean and incapable of most To preserve life forms. At 227 feet below sea level, the lake is slowly drying up as water evaporates in the harsh Sonoran desert sun, eventually creating toxic dust that will no doubt find its way to the outer suburbs of Los Angeles.

The article is courtesy of ELEMENTS magazine. ELEMENTS is the new monthly magazine dedicated to the finest landscape photography, insightful editorials and a flowing, clear design. Inside, you’ll find exclusive and in-depth articles and images from the world’s best landscape photographers such as Freeman Patterson, Bruce Barnbaum, Rachael Talibart, Charles Cramer, Hans Strand, Erin Babnik and Tony Hewitt, to name a few. Use the PETAPIXEL10 code for a 10% discount on the annual subscription.

About the author: Guy Havell was born in Australia in 1968 and is a fine art photographer who specializes in landscape photography. When not traveling, he lives in Brisbane, Australia, where he runs his Guy Havell Photoscapes photography business. He is a member of the Australian Institute of Professional Photography (AIPP).

Credit: All photos by Guy Havell and used with permission.

Getting the shot: Cavendish gets the number 34

Scene at MIT: the beauty of nature and architecture in no time at all | MIT news