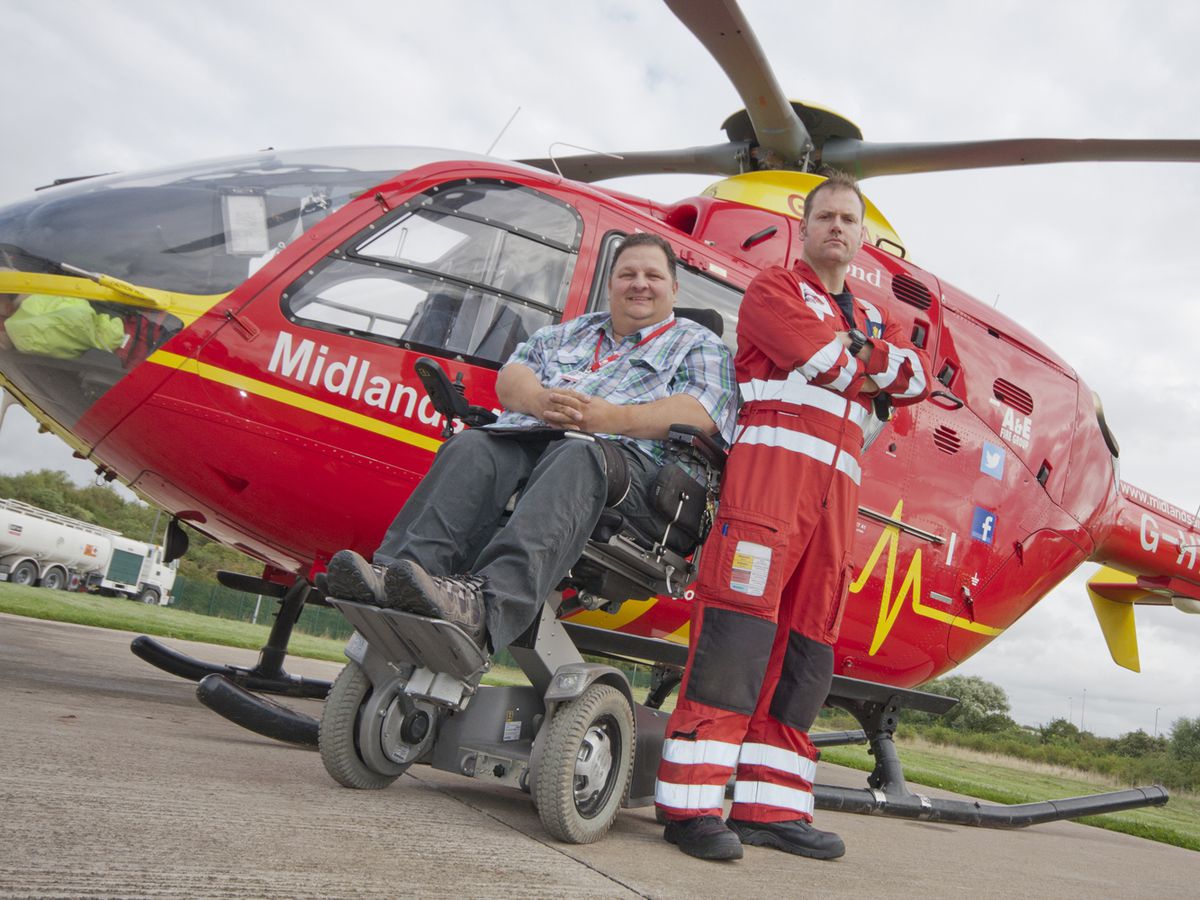 The photo exhibition shows 17 former patients, including from Shropshire and the Black Country, whose lives were partially saved by the preclinical emergency service.

The project was commissioned on the occasion of its 30th anniversary and shows how the clinical and operational skills and expertise of the Midlands Air Ambulance Charity have developed in pictures and words of patients over the past three decades.

Among them Yasmin Jukes from Whitchurch, Marcus Watkin from Shrewsbury and John Walton from Dudley as well as Leah Washington, who had to amputate a leg after an accident at the Alton Towers theme park in 2015.

Marcus Watkin was recognized as one of the ambulance’s most dedicated fundraisers.

He has been helping the charity since he had a serious accident while riding a motorcycle in the county nearly 20 years ago. His injuries after being hit by a car on the wrong side of the road left him paralyzed.

He’s now tirelessly collecting donations for the charity and was named fundraiser of the year in 2018.

Yasmin Dukes suffered a traumatic brain injury when she was just 17 years old in February last year when she fell backwards down the stairs.

Her mother Caroline said Yasmin kept passing out when the ambulance arrived.

Surgeons at University Hospital North Midlands in Stoke found that she had broken the base of her skull and had been in the hospital for just under six weeks.

Dudley’s John Walton was playing squash with his 40-year-old friend Clive Fletcher at the Bert Williams Leisure Center in Bilston in January when he suffered cardiac arrest.

Clive knew how to perform CPR and immediately began helping John until the recreation center staff took over and put a defibrillator on him.

Among those who came to help was a team from the Midlands Ambulance, and John’s treatment was filmed for the television show Ambulance: Code Red.

Her portraits and others supported by the Midlands Air Ambulance were shot in black and white by renowned fashion and lifestyle photographer Nik Hartley, whose renowned clients include British Vogue, Elle Italia, Karl Lagerfeld and Tommy Hilfiger.

Nik was keen to help ambulance services after learning that he was not receiving any government or NHS funding for his daily life-saving missions.

The outdoor exhibition, which will officially open in Chamberlain Square in Birmingham on Friday, will tour the six counties the life-saving charity covers – the West Midlands, Shropshire, Staffordshire, Worcestershire, Gloucestershire and Herefordshire.

Mission Critical is a partner of Safeguard Medical, The Wesleyan and Irwin Mitchell LLP and is supported by the DRP Group.

Emma Gray, Chief Operating Officer of the Midlands Air Ambulance Charity, said, “On our 30th anniversary, this exhibit will help us remember 30 years of life saving service while celebrating the courage and courage of former patients treated by our specialist team by telling their survival stories.

“We hope this activity will put the spotlight on our lifesaving service, which will be in demand as the region’s population grows. In addition, the type and type of operations are becoming more and more complex, so that our preclinical emergency service is needed more than ever. “

To learn more about the lifesaving work of the Midlands Air Ambulance Charity, visit midlandsairambulance.com and follow the charity on social media.